There are two conditions that are required to generate hydroelectric power, either on a large or small scale.  These are:  1)  a source of flowing water; and 2) topographic relief in the landscape to provide the flowing water with potential energy.  Hydroelectric power generation, whether large- or small-scale consists of nothing more than channeling the water down a gradient and introducing it into a turbine, which generates current.

AC-current cannot be stored for later use.  AC-Direct, or mini-hydroelectric power generation systems are large enough that the power generated satisfies the entire power demands of the facility or community in question.  Excess power is either channeled into a regional or national power grid or burned off as heat.  If the instantaneous power demand exceeds what an AC-Direct system is capable of producing, then those power demands will go unmet.  For this reason, mini-hydroelectric applications typically require large flows of water and are not typically appropriate for single-user applications.  The ideal circumstances for an AC-Direct system is one in which power in excess of demand can be sold to a national or regional power grid so that the power does not have to be burned off as heat.  At present it is not possible to do this in Costa Rica, so AC-Direct is not typically the economic preference.

For smaller applications, micro-hydroelectric power generation is much more efficient use of resources.  In micro-hydroelectric applications, a rectifier is deployed to convert the rough AC hydro-power to DC current which is then passed through a charge controller and used to charge batteries.  An inverter is then used to convert DC battery power to AC that can be used to power conventional household appliances.  Micro-hydroelectric power systems are therefore nearly identical to solar power systems, only instead of solar panels a water turbine/alternator/rectifier assemblage provides the charging source.

To better appreciate the distinction between micro- and mini-hydroelectric power generation, let us consider the empirical formula that governs hydroelectric potential, which is given below:

Consider the case of a three-inch pipeline carrying water from a vertical relief of 200 feet.  We can assume a flow rate in this size pipe of 125 gpm, so this configuration would provide a hydroelectric power potential that varies between the two types of power generation as a function of only the difference in efficiency.  The power potential of the two options are shown in the table below

With a mini-hydroelectric turbine, such a system would not allow for the usage of more than 3 kilowatts at any time.  So, a home could simultaneously operate only a small number of electrical appliances.  If users were using close to its production limit, then additional appliances could not be used without first turning something off.  In addition to having a ceiling of power production of 2.9 Kw, at night when there is no power consumption, that same power production would still be produced, and this power would need to be dispersed by heating water or by simply wasting it in a heat sink.  If the system were tied to a regional power grid, on the other hand, the energy produced in the evening hours would be sold to the grid, and when demand exceeded supply, the grid could supply the excess needed.  So, for a grid-tie alternative, mini-hydroelectric is quite efficient, since in the long run, presuming that the power purchase and power sale rates per kilowatt are the same, even small hydroelectric capacities are likely to have an economic return on investment.

The economics of hydroelectric power generation are favored by the very low maintenance and operations requirements of such systems.  Because hydro systems can be almost completely automated, once they are installed and operational, there is very little operator attention required at any time, and maintenance needs are normally limited, depending on the complexity of the system, to a few yearly maintenance tasks.  Correspondingly, the only real cost of a hydroelectric power generation system is the capital cost of equipment procurement and installation costs.

Our experience in the rigorous environment of remote building sites in Costa Rica is that hydroelectric power generation is a robust source of energy to remote homes and lodges far removed from the national electrical grid.  Although the same may not be said for industrialized societies, where grid power is more stable, privately owned hydroelectric plants are consistently more reliable than the nation’s power grid, which often experiences frustrating power failures.  A back up diesel, propane, or gasoline generator is capable of providing a redundant power source for those rare instances in which hydroelectric power is disrupted for annual maintenance, or the rupture of a pipeline by a fallen tree.  For environmentally sensitive locations, such as the tropical montane rain forests of southern Costa Rica, hydroelectric power generation has the additional benefits of greatly reducing irreplaceable fossil fuels as well as eliminating their greenhouse gas emissions.

Osa Water Works has developed proprietary designs for both hydro-pipeline intake structures as well as multiple-nozzle hydroelectric manifolds.  Our intake filtration systems are guaranteed for life to be maintenance-free, non-clogging, and to greatly reduce suspended sediment, which can promote unacceptable wear and tear on downstream turbines and fittings.  Our multiple-nozzle manifolds enable the optimization of what water is available, given that seasonal water flow rates may vary across orders of magnitude according to climate and topography.  These downstream configurations provide for the widest latitude of power generation available on the market and are configured specific to each installation according to the hydrologic characteristics of the watershed under hydroelectric development.  If you feel that your property may be adaptable to hydroelectric power generation and would like a no-obligation assessment from Osa Water Works, we invite you to click here to fill out and submit a standard questionnaire with which to evaluate your information to provide you a first-cut assessment of the potential of the resources available to you, or you can simply write me an e-mail.  To do the design and engineering yourself, you may use the Hydroelectric Designlink to walk you through the design process. 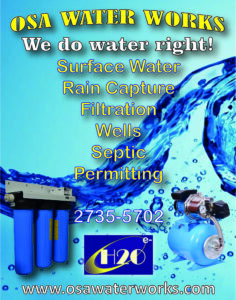 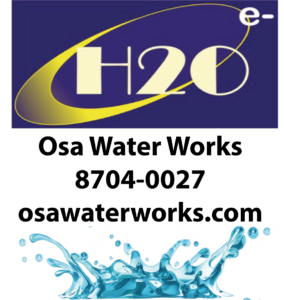